What is a furry/what is the furry fandom?

Super-short answer: Furries are a community built around a shared love of human/animal characters (Bugs Bunny, Zootopia, that sort of thing). It’s a young community, mostly guys in their 20s, loaded with artists and creative types.

“Too Long, Didn’t Read” answer: There are a lot of definitions of furry, and some good reasons why this is a hard question! Furries are a fandom (a subculture community usually built around a product, movie, piece of literature…), but a fandom that’s not based on any particular media or central property or even a central activity (see PBS’s Idea Channel). Lots of furries like Disney’s “Zootopia,” dressing in animal costumes (“fursuits”), going to conventions with thousands of other furries, drawing and buying furry artwork, but there’s no one thing that all furries are or do.

But here’s some things that are true of lots of furries: 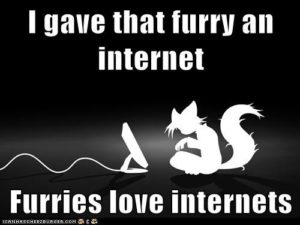 The furry fandom is a young fandom, with an average age of 25, and a third of its membership under age 20. Maybe much more than that, we don’t have data on fandom members under 18! It’s a guy-heavy fandom (70% male), but that’s common in other fandoms. Furries tend to like video games and board games, cartoons and anime, internet communities and chats. It’s an intensely creative fandom, half of furries identify as an artist or writer, and we love our community of artists, musicians, DJs, and performers!

So for now, we’ll say that furries and the furry fandom is a young, playful fandom community with a shared love of animal/human images and ideas (“funny animal” comics, disney cartoons, anime, talking animal stories, werewolves, and of course real-life animals!)